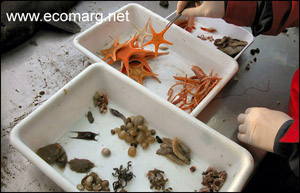 The term biodiversity is universally used to evaluate the conservation status of ecosystems. According to the UN´s Conservation and Sustainable Use of Biological Diversity treaty, biodiversity is defined as the variability of living beings from any source, including, among others, terrestrial, marine and other aquatic ecosystems and the ecological complexes they belong to; it comprises diversity within each species, between species and of the ecosystems.

That is, biodiversity is considered to be formed by three interrelated components:

The objectives of the ECOMARG project aim mainly at the two latter components. 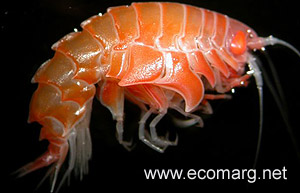 Many scientific studies have shown that ecosystems that have a good conservation status are mainly controlled by interspecific biological relationships (competition, predation, etc) while those subjected to environmental disturbances are regulated by physical variables, due to them being subjected to extreme natural physical conditions or to anthropogenic impacts. Well structured ecosystems present a higher number of species since the dominant ones are controlled by predation or competition; opposite to what happens in non-structured ecosystems. In these slightly disturbed ecosystems there are more occasional or rare species and structural or biogenic (corals, sponges, algae) species that increase the complexity of the ecosystem and hence promote the presence of a higher number of species, are abundant.

The Galicia and Cantabrian Sea shelves ecosystems have been studied and catalogued by the Instituto Español de Oceanografía (IEO) since 1983 by means of bottom trawling surveys. We have temporal series of georeferenced data of species richness and diversity. Transition ecosystems between the shelf and the slope have received less attention even if with the ECOMARG project a new research line has been started. The multidisciplinary methodological approach which characterizes the project is providing valuable information regarding the endobenthic, epibenthic and suprabenthic communities. The lists linked to the following table enumerate all catalogued species to date in the study areas:

Click on the image of interest to display more information on PDF: